Interview with a Zombie, Part 1

Welcome to the first in a series of interviews with the zombie I keep chained under the house. For scientific purposes. His name is Gorm.

More...
posted by your pal Rob DeBorde published: 1/31/2012
Email ThisBlogThis!Share to TwitterShare to FacebookShare to Pinterest
Labels: Interview with a Zombie, Zombies

Welcome to the Zombie Clambake

Welcome to my corner of the online universe. Who am I? My name is Rob. I’m a writer of books and assorted seafood recipes. Mostly books these days. In October my first novel will be published by St. Martin’s Press. It's called Portlandtown. There are zombies in it, although it's not strictly speaking a “zombie novel.” I’d call it a supernatural horror adventure...or something like that. Don’t tell me editor.


Being the observant reader you no doubt noticed that the name of this blog is "Zombie Clambake." True. I never said I didn't like zombies. I love the silly bastards. This is my place to write about zombies, monsters, books about zombies and monsters, and whatever else comes to mind. Fun stuff.

Hang around if you like. Eventually, I might think of something clever to say (it could happen). There'll be some cool things to come, I promise. A little of this (zombie interviews), a little of that (zombie sports), some of those other things (recipes)...you know the drill.

Thanks for stopping by.
posted by your pal Rob DeBorde published: 1/30/2012
Email ThisBlogThis!Share to TwitterShare to FacebookShare to Pinterest 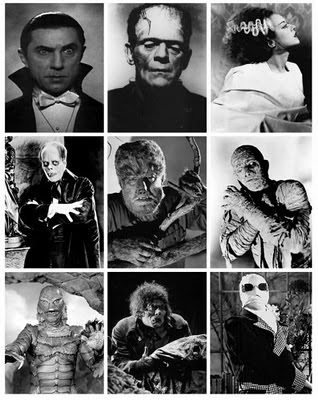 It occurs to me that My list was a little short on Universal Monsters. I didn't mean to slight anyone, I was just calling out the big four. In fairness, the full list should include: Dracula, Frankenstein's Monster, the Bride (of Frankenstein), the Phantom (of the Opera), the Wolfman, the Mummy, the Creature (from the Black Lagoon), the Hunchback (of Notre Dame), and the Invisible Man. Quite a list.

Okay, I've been thinking about monsters lately, the classics, AKA The Universal Monsters: Dracula, the Wolfman, the Mummy, and Dr. Frankenstein's creature. A nice bunch (hence the "classic" moniker). But not exactly a relevant gang today, at least not without some revisions.

So...vampire, yes, Dracula, no. Sexy Vamp is probably the best answer. If you want to attach a name, be my guest. I'd got with Eric Northman over any of the sparkly vamps, but then I'm not 13. Or a girl. Anyway, pretty boy vamp is in, as is wolfy--moody, sensitive, nature-lovin' wolf. Sigh. Okay.

Now, there have been a few Mummy movies in recent(ish) years, but the mummy wasn't particularly memorable. Not a problem. Zombie is the new Mummy. Makes sense, right? Resurrected dead guy, curse, black magic, plagues, hygiene issues, gonna getcha...sounds good. (You knew there was gonna be a zombie here, right?)

That just leaves Frank. Hmmm...that's a tricky one. But I have suggestion: Wikus from District 9, specifically after he's transformed into a prawn. That's close, right? I know, I could just stick in an alien or predator, but there's something about Wikus that just seems to fit. (How about that sequel, boys? Hello? Pete? Neil?)

That's my take anyway. Now, somebody get on that Abbot & Costello Meet the Zombie reboot.

Flags of Our Zombies 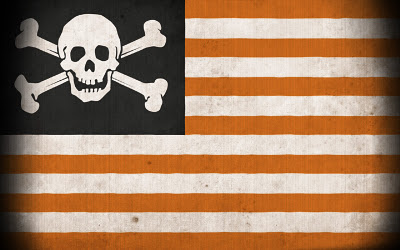 I like flags. There's just something cool about fabric flapping in the breeze, especially when it says something. Thus I present to you the Jolly Sam. Or Uncle Roger. Really, this flag should be flying over every patriotic zombie's house. Or grave. Whichever seems more appropriate.

This is the Zombie Clambake 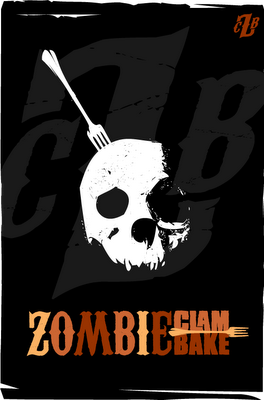 Yes, friends and neighbors, welcome to the newly remastered Zombie Clambake. As you can see we're still in the process of renovating, but like any good work in progress it's better to keep things lively, hence this pleasant post and its visual aid. That would be the official poster for the ZCB on the left. Every good blog needs a poster, right?

Expect to see more pretty pictures, stories, random anecdotes, and interviews with interesting and undead people. In fact, the very next entry will likely be the first in a series of posts entitled: Interview with a Zombie. Don't say you weren't warned.

We apologize in advance if our clean-up efforts take longer than expected, but it'll be worth the wait, we promise. Go Zombies!
posted by your pal Rob DeBorde published: 1/24/2012
Email ThisBlogThis!Share to TwitterShare to FacebookShare to Pinterest
Labels: zombie art

Okay, we're not up and running just yet, but just doing a little bloggy test. Old school. More than 140 characters in other words. Are we there yet? Sweet. See you soon.
posted by your pal Rob DeBorde published: 1/23/2012
Email ThisBlogThis!Share to TwitterShare to FacebookShare to Pinterest

Yes, this rarely update blog will soon undergo a radical redirection from a blog about graphic design and food to one about...zombies! More or less. There'll probably still be some writing about beer and the occasional recipe or something. Why? Good question.

On October 16, 2012 my first novel, Portlandtown, will hit stores thanks to the fine folks at St. Martin's Griffin. It's a fun story set in Oregon, 1887, that features heroes, villains, and a few zombies. You'll like it. And in advance of publication I'll be doing a few things to help promote my new career, such as transforming this blog into a place where humans and zombies can coexist peacefully without fear of brain-eating or brain-bashing. Really, can't we all just get along?

Stuff I Talk About a Lot